The peer-reviewed journal of the Royal Society of Chemistry has published a paper by Dr. Joshua Yuan of Texas A&M AgriLife Research.  The essence is that lignin, a class of complex organic polymers found in vascular plants and algae can now be converted into high quality carbon fiber, which has a wide variety of applications.  Credit: phys.org 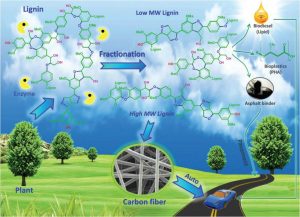 Here are the details: Lignin is derived from the Latin word lignum which means wood.  It is believed that its original function was to provide structure in plants but in most vascular plants (which includes ferns and flowering plants), it is used for transporting water.

Each year the US paper and pulp industry outputs about 50 million tons of lignin as waste, while biorefineries that use plants to make ethanol could potentially yield another 100 to 200 tons of lignin.  Today, only about 2 percent of this lignin is recycled into new products.

Sir Joseph Wilson Swan, a British physicist, chemist and inventor is known as an independent developer of the incandescent light bulb, credited with supplying the electric lights used in the world’s first homes and public buildings (Savoy Theater in 1881).  He invented the carbon fiber in 1860.  Source: Wikipedia

The demand for carbon fiber composites is increasing by 7% each year to reach US $10.8 billion in 2015.  With the ability to turn lignin into high quality carbon fiber, the applications will explode.  Source: Wikipedia

The most important point is that this entire bioeconomy of growing, harvesting and transporting the lignin and the advanced manufacturing into carbon fibers, can all be in the US.   Last year, Phys.org published this story about carbon fiber from wood used to make cars and batteries.  Lignin batteries are indistinguishable from Lithium batteries.  So, it’s not too far out in future.